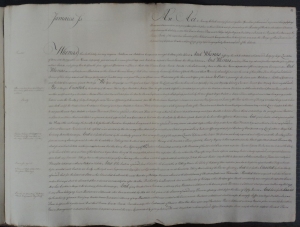 First folio of ‘An Act to Remedy the Evils arising from Irregular Assemblies of Slaves, …’, Jamaica, 1760, TNA CO 139/21. Image reproduced courtesy of The National Archives, UK.

Obeah became a crime for the first time as a result of a comprehensive Jamaican law intended to prevent rebellions by slaves, passed in 1760. The law was the Jamaican planters’ response to the biggest slave rebellion that took place in the eighteenth-century British Caribbean, which came to be known as Tacky’s rebellion. The rebellion began at Easter 1760, when 150 enslaved people attacked the fort at Port Maria in the parish of Saint Mary. Their leader Tacky, an enslaved man from the Gold Coast (today’s Ghana), gave the rebellion its name. The resistance grew in size; uprisings took place across Jamaica, including in the parishes of Clarendon, Saint Elizabeth, Saint James, and Westmoreland, while plans for rebellion also existed in Kingston.

The fighters forged solidarity through oaths and rituals of spiritual protection that drew on Akan spiritual knowledge. The Jamaican planter-historian Edward Long claimed that Tacky was advised by a ‘famous obeiah man and priest, much respected among his countrymen’. Long continued:

He was an old Coromantin, who, with other of his profession, had been a chief in counseling and instigating the credulous herd, to whom these priests administered a powder, which, being rubbed on their bodies, was to make them invulnerable: they persuaded them into a belief, that Tacky, their generalissimo in the woods, could not possibly be hurt by the white men, for that he caught all the bullets fired at him in his hand, and hurled them back with destruction to his foes

‘Coromantin’ (or Coromantee) referred to the town Cormantin (also known as Kormantin or Kormantse), west of Accra, but was used more generally to describe people who had come to the Americas from the Gold Coast region. Although the ‘obeiah man’ who advised Tacky was killed early in the rebellion, and Tacky himself was later killed, armed resistance continued for months.

The Jamaican planter class was shocked by the rebellion of 1760 and, once it had been suppressed through  military force, acted to try to prevent future rebellions. The ‘Act to Remedy the Evils arising from Irregular Assemblies of Slaves’ attempted to combat future rebellions by placing broad controls on enslaved people, forcing slaveholders to take security seriously, and limiting the freedoms of people of colour. As well as making obeah a crime, it restricted enslaved people’s movements–both their ability to leave plantations and to gather together–and prohibited them from owning weapons. At the same time, the Assembly passed a law which required minimum numbers of white people to reside on plantations.

The anti-obeah clause within the act was influenced by European concepts of witchcraft and Christian doctrines of evil, referring to ‘the wicked Art of Negroes going under the appellation of Obeah Men and Women, pretending to have Communication with the Devil and other evil spirits.’ The phrase ‘pretending to have Communication with the Devil’ reflected Enlightenment ideas that denied the possibility of such communication actually take place. The Act also provided some details of the materials that legislators thought obeah practitioners used: items that could be used to provide evidence of obeah practice included ‘Blood, Feathers, Parrots Beaks, Dogs Teeth, Alligators Teeth, Broken Bottles, Grave Dirt, Rum, Egg-shells.’ The punishment those found guilty of Obeah was either death or transportation. This extreme punishment highlights how the development of Caribbean law, in societies dominated slavery, differed from law in England, where witchcraft was no longer a crime, although accusing someone of witchcraft was.

Jamaica was the first Caribbean colony to make obeah a crime, and for a good thirty years no other colony followed suit. The next colony to pass legislation against obeah was Belize (British Honduras), in 1791. However by the time slavery ended in 1838, all the large and most of the smaller colonies had made obeah illegal, usually through slave codes such as that passed in Grenada in 1825.

The Obeah-related Section of the Act

An Act to remedy the evils arising from irregular assemblies of slaves, and to prevent their possessing arms and ammunition, and going from place to place without tickets; and for preventing the practice of obeah; and to restrain overseers from leaving estates under their care on certain days; and to oblige all free negroes, mulattoes or Indians, to register their names in the vestry-books of the respective parishes of this island, and to carry about them the certificate, and to wear the badge, of their freedom; and to prevent any captain, master, or supercargo of any vessel, bringing back slaves transported off the island.

‘And in order to prevent the many Mischiefs that may hereafter arise from the wicked Art of Negroes going under the appellation of Obeah Men and Women, pretending to have Communication with the Devil and other evil spirits, whereby the weak and superstitious are deluded into a Belief of their having full Power to exempt them whilst under their Protection from any Evils that might otherwise happen Be it therefore enacted by the authority aforesaid that from and after the first day of June which will be in the year of our Lord One thousand Seven hundred and Sixty one [1761], any Negro or other Slave who shall pretend to any Supernatural Power, and be detected in making use of any Blood, Feathers, Parrots Beaks, Dogs Teeth, Alligators Teeth, Broken Bottles, Grave Dirt, Rum, Egg-shells or any other Materials relative to the Practice of Obeah or Witchcraft in order to delude and impose on the Minds of others shall upon Conviction thereof before two Magistrates and three Freeholders suffer death or Transportation any thing in this Act or any other Law to the contrary notwithstanding.’

An Act to Remedy the Evils arising from Irregular Assemblies of Slaves, Jamaica 1760, in CO 139/21, The National Archives, UK

1 thought on “An Act to Remedy the Evils arising from Irregular Assemblies of Slaves, Jamaica 1760”